Read this wonderful little tale below about a Secret Fairy Door that was in a little girl’s room.

This will be a segmented series about The Secret Fairy Door. Read installment number one below. 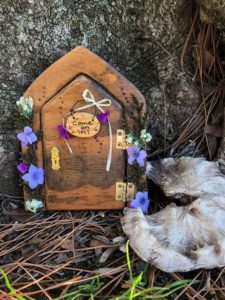 Once upon a time there was a little girl named Tabbitha, who loved Fairies. She liked to draw them, watch movies about them, and read stories all about an Enchanted World. Tabatha was a precocious girl. Some believed her to be self-righteous, and aloof. But really, she just felt like she didn’t fit in. She always wanted to be in her special place- somewhere more make believe. Sometimes, in her sleep, she would even visit her special Fae friends. They would all play together in a beautiful realm of beauty, friendship, and games.
While she was visiting with the Fairies, she could totally escape. The reality of her secret world was so real, she could even smell her surroundings. It smelled like honeysuckle, and roses, and maybe a little bit of elder flowers; but it was always sweet, warm, and home-y.
Sometimes, it felt so much like home, while she was back in her normal world, with her family and at school, it felt like the real place was the make believe one. Somewhere where she didn’t quite fit in.
She loved to make small displays of the Fairy world that she dreamed about. In these displays she would put not only Fairies, but Gnomes, Woodsprites, Pixies and Elves.
Suddenly, one day it dawned on her that she did not have a Fairy door in her room! Of course that is just what she needed! No wonder they only came to her in dreams- they could not get inside!
She decided to find the right door that would allow her friends to visit.
She wanted a door that would be inviting for her otherworldly acquaintances. In her mind, it should be one that would open and close. It might also have a saying on it and of course, have lots of flowers.

She found just the right door! It opened and closed, had a sign, and was

delightful with so many flowers and vines. She placed it outside her room along the bottom of her wall, outside. This way, the Fairies could travel from outside to in her room.

See what happened in next week’s installment of : The Secret Fairy Door- Part 2

If you would like to purchase this door, I can make one just for you! They are available as a made to order item in my Etsy shop. Here is the link to the listing:  Secret Fairy Door

Watch Sprouted Dreams Facebook page to see when Part 2 of the Secret Fairy Door is posted.